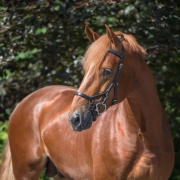 Habanna-son Karolus Magnus was crowned Champion Stallion of the Gelder horses during the KWPN Stallion Show in Den Bosch. The stallion was bred by Dressuurstal Rutten in Hunsel, Limburg, where Habanna was also born. “I am rather proud of him“ said Bert Rutten. “An appointed stallion by our own approved stallion.”

Karolus Magnus is long-lined, has a strong conformation and a strong core. ‘And a willing and easy temperament’ according to Rutten.

Karolus Magnus was prepared for the stallion inspection by Irma de Crom, who also broke him to saddle after the first viewing and then took him for a hack. ‘After he was selected in Den Bosch we collected him and then lunged him at home. He is now also ridden here at the yard.”

Dam of the chestnut stallion is Finetty, an Alexandro P daughter. ‘Pure-bred Gelder and out of a very good Ria Hekkert bloodline.’ Granddam on the sire’s side is the Grand Prix mare Dimare (s. Van Gogh) the full-sister of Sönke Rothenberger’s Cosmo 59.

Dimare, just like son Habanna (s. Vivaldo), is ridden by Kirsten Beckers who came third with him in the final of the stallion competition at M-level.

If Karolus Magnus is approved after the performance test then a dressage ring career awaits him. ‘And in the Autumn he has to prove himself in harness and also has to jump. He does the latter very well already. He really shows the versatility of this pedigree very well. If there is demand from the breeders, then he will of course also perform stud duties. I hope that it goes the way I expect it to and maybe even just a little bit more.’