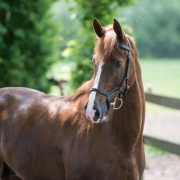 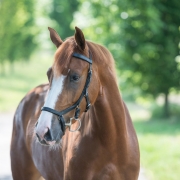 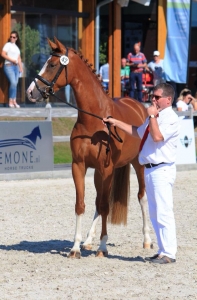 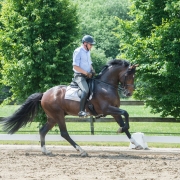 A day after the jumping horses, today was the dressage horses’ turn at the Limburg studbook inspection. In Hunsel twelve mares were awarded the ster predicate, including Kerrodelin E (s. Governor) and Kolibrie (s. Habanna) with 80/80.

Inspector Petro Trommelen, together with Floor Dröge, assessed 21 dressage mares, 12 of these were awarded the ster predicate. ‘That is an average ster percentage, and what is positive is that there was really no bottom end, instead we had two exceptions at the top end” said Petro Trommelen. At the inspection, held at Dressuurstal Rutten, host Bert Rutten himself owned one of the two exceptions: the three-year-old Habanna-daughter Kolibrie (out of Galanta ster IBOP-dres PROK by Alexandro P). She was awarded 80 points for both her conformation as her way of going. “This mare has a good rectangular model with good proportions and a sound and correct foundation. She stood out due to her excellent trot whereby she consistently correctly uses her hind leg to set off and carries her withers nicely upwards. She also showed a walk with abundant scope and has a powerful canter.” With the same high level the Governor-daughter Kerrodelin E (out of Gwendelin E elite IBOP-dres PROK by Bordeaux) bred by H. and H.J.C. Ebbers, was awarded the ster predicate. “This mare is well-proportioned, has a good top line and a correct hind leg. Her trot is very relaxed with a good use of the hind leg and she has a naturally nice carriage. For the trot we were able to give her 85 points.”

From the same family as the previously-mentioned Habanna-daughter Kolibrie is the Habanna-daughter Karma (out of Florence stb-ext sport-dres PROK by Alexandro P) also bred by Dressuurstal Rutten. She also scored 80 points for her way of going as well as 75 for her conformation. “This mare is closely related to the other Habanna-mare. She has a youthful model and a very nice way of trotting in which she can collect well and requires very little speed. Karma was given 85 points for the trot. ”Two mares were awarded the ster with 70/80. First of all the Fairytale-daughter Kristanetty (out of Anetty stb-ext by Havidoff, bred by M. van Moorsel in Lieshout) from Dressuurstal Rutten. This long-lined mare has good tact in trot and canters with abundant scope and balance. She also showed how she can easily perform changes. Amongst the older mares the five-year-old Ile de Legante N (El Capone out of Legante elite sport-dres pref PROK by Flemmingh, bred by J. Menting in Overasselt) owned by J.M.J Jacobs in Reijmerstok also approached the 80 points. This appealing mare has a scopey, athletic and pure walk. She has good hind leg action in trot and a nice front leg technique. 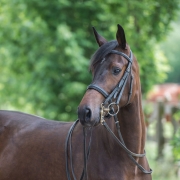 The first competition for Ivera with Esmee Ingham Friday evening, she was a little tense at the beginning but in the end she rode two good tests. A mare with a lot of potential for the future!

Sunday was also fantastic, with Galanta and Esmee Ingham in the Z1. 68% for the first test and 64% for the second test. 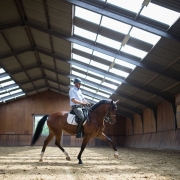 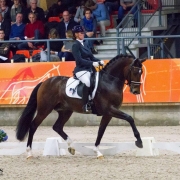 Habanna (Vivaldo x Van Gogh) achieved a credible third place in the Stallion Competition at M-level, with Kirsten Beckers in the saddle. 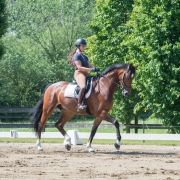 A superb start at Z1-level last week and today qualification for the IBOP. As a result, Galanta (Alexandro P x Lohengrin) has been awarded the ster predicate. For dam Pollie (Lohengrin x Transvaal) this means that in addition to her prestatie predicate she will now also receive the preferent predicate. Well done Esmee Ingham. 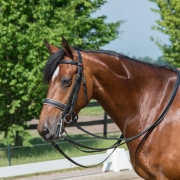 Yesterday Esmee Ingham and Galanta (Alexandro P x Lohengrin x Transvaal ) made their Z1-level debut. For Galanta this was the very first competition; and immediately a very good result with a first place (73%) and second place (71%). Well done both! Galanta is out of our prestatie mare Pollie. 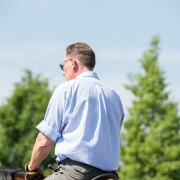 This year Bert Rutten is joining the dressage selection committee of the Limburg Foal Auction. Bert Rutten runs his own successful dressage yard in Hunsel, Limburg. His aim is to breed good and talented sports horses, to train them and then to sell them on. Through this, he has built up a lot of knowledge in selecting good dressage horses. We are therefore pleased with his appointment and wish him good luck in selecting talented dressage foals for our auction.

The selection committee for the jumping foals consists of president Harrie Derks, Paul Hendrix and Cor Loeffen. For the dressage foals these are Harrie Derks, Bert Rutten, Gertjan van Olst and Trudi Houwen. 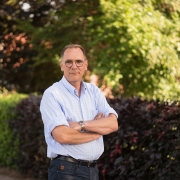